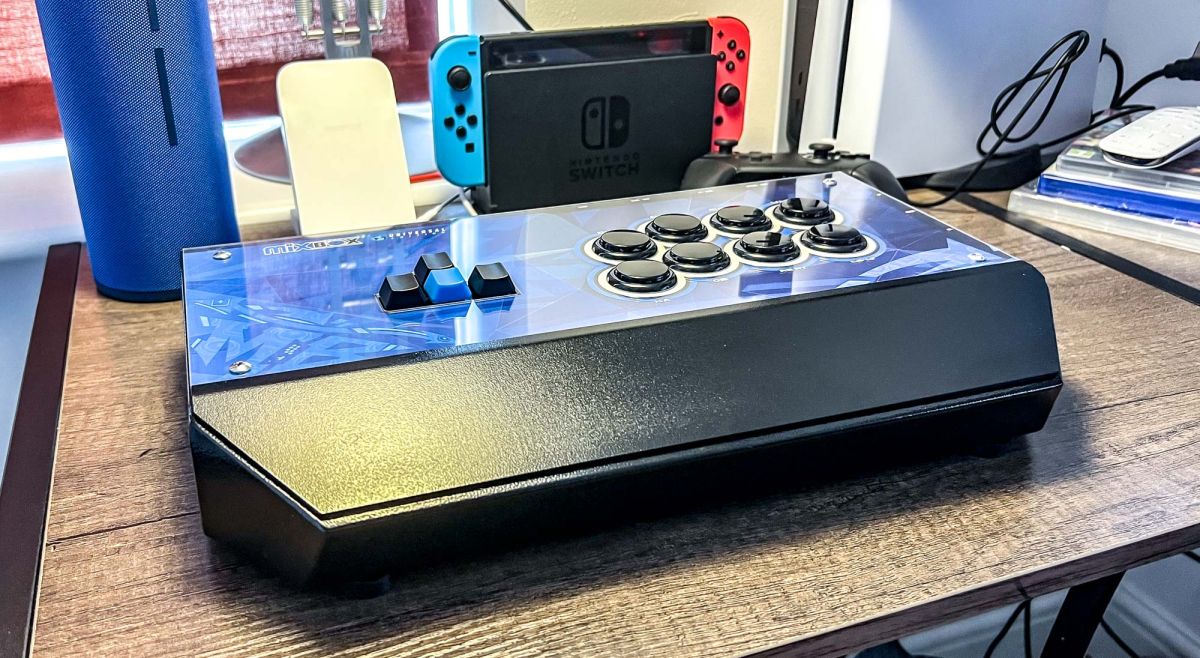 Fighting games like Street Fighter or Tekken were born and raised in the arcade, and even today when fans play at home, many still play using a traditional arcade-style controller, or “fight stick” with a joystick and large round buttons. me, but recently I tried a new style of controller that I’ve been hooked on and that mixes the old with the new.

It’s called the mixer box (from $269), and it essentially rips the joystick out of your typical arcade controller and replaces it with WASD-style keyboard keys.

Rather than using an old-school 8-way arcade joystick or a less specialized analog stick-like controller, using this familiar quartet of keys feels like a much more familiar and precise method of control. And that’s exactly what the Mixbox delivers, for better and for worse, and that’s part of why it’s become my new favorite way to play fighting games.

But first, a few issues. My main complaint with the Mixbox is its build quality. The metal and plastic parts are strong and sturdy, but the whole thing lacks polish, with lots of rough and sharp edges exposed due to its bolt-on design, and even a loose screw on one of the legs when I put it on. unpacked.

This is compounded if you consider the cost of the thing. The Mixbox starts at $269, but the universal version with optional PS5 compatibility that I tested is $429. Buying it is as much an investment as buying a new console, so I would have preferred a slightly higher quality finish. Fortunately, the real negatives end there.

Although the Mixbox ditches the traditional joystick, it retains the big Sanwa Denshi buttons (the gold standard for arcade buttons) so you can make sure you’re hitting the right attacks at the right time, or just have more ease to smash frantically. It uses the Vewlix button layout, which some dedicated combat players don’t like this style of, preferring the flatter Noir button layout, but I’m personally used to Vewlix buttons so I don’t mind.

You’re spoiled for choice for buttons, with four on the back and three on the side. These let you use all the inputs you’ll find on a regular gamepad, including the touchpad you find on recent PlayStation controllers. You won’t need it during battles, but navigating the game and system menus or setting up practice mode becomes much easier when you have all the hotkeys available.

Something that’s potentially super valuable is the broad compatibility. The standard Mixbox works with the best PC games and the best PS4 games, which should be fine for the majority of combat gamers. The version I was able to test is the Universal Edition, which supports Playstation 4 (including PS4 games played on a PS5), Xbox Series X and Series S, PC and Switch and others, as well as games PS5 via optional upgrade. It’s fantastic if your fighting games are spread across multiple different platforms, like I do. Rather than having to buy controller adapters, you can use the cable to get plugged in and started quickly and easily.

There is even more customization on offer when you place your order. You can install the WASD keys at an angle for a more comfortable hand position, and choose one of three Cherry MX key switch types to get the directional feedback you prefer. You can even buy “Reverse” versions of the black and universal models that swap keys and knobs, good if you’re left-handed.

Setting up the Mixbox is as easy as you could hope. It worked easily with my PC as soon as I plugged in the USB cable and booted up Guilty Gear XX Accent Core Plus, with all the buttons behaving as they should without needing to rebind them. Same in Street Fighter V and on my PS5 with Guilty Gear Strive.

My biggest fear while testing the Mixbox was around the special move inputs. Depressed “charge move” inputs didn’t seem to be a problem, but I wondered if move inputs, such as the traditional forward quarter-circle fireball or zigzag uppercut, would take a hit. some time to get used to it. To my surprise, I was able to conjure Hadokens, Gun Flames, Shoryukens, and Vapor Thrusts for the first time even on the older Guilty Gear XX with its tighter entry timings. If it worked well, I’m sure less tedious entries in games like Mortal Kombat or Tekken won’t pose any challenges.

The MixBox requires greater precision in use compared to a joystick combat controller or the analog stick of a regular gamepad, and in an area where you may not have needed to be so precise previously. Opposite directional inputs can only be done so quickly on a joystick or analog stick, as you have to physically move the stick from side to side, only inputting one direction at a time. When you have separate inputs like with the Mixbox keys, you have to time them correctly or end up overlapping or canceling your inputs.

This is something I particularly noticed while playing SFV. Although I performed Nash’s clumsy back mid kick hundreds of times in the light Tragedy Assault combo on a stick, I found myself having to re-learn it from scratch on the MixBox because I ended up mistiming the forward movement.

Don’t be upset if you start dropping missing combos or entries that you used to nail every time if you buy this stick. It looks like this will be an inevitable part of adapting to the Mixbox, unless you’re already familiar with the all-button controls.

At the end of the line

Combat sticks are not a purchase to rush into, as they are expensive and very specialized. If you don’t like it, that’s a lot of money you just wasted on a controller that isn’t good for many other games. However, if you want a fighting game controller, I think the Mixbox is at least worth shortlisting.

The WASD-like layout doesn’t look traditional, but I can confirm that it definitely works once you get used to it. It’s its own beast though, so you’ll need to learn how to use it whether or not you’re new to baton combat.

Perhaps the best reason to get a Mixbox is the plug-and-play ease of the Universal Edition, which simplifies battles across multiple consoles. Although not the prettiest fighting stick, I trust the durability of the parts. If it weren’t so expensive, it would be an easy recommendation, but it’s a purchase you’ll need to be triply sure of before buying.