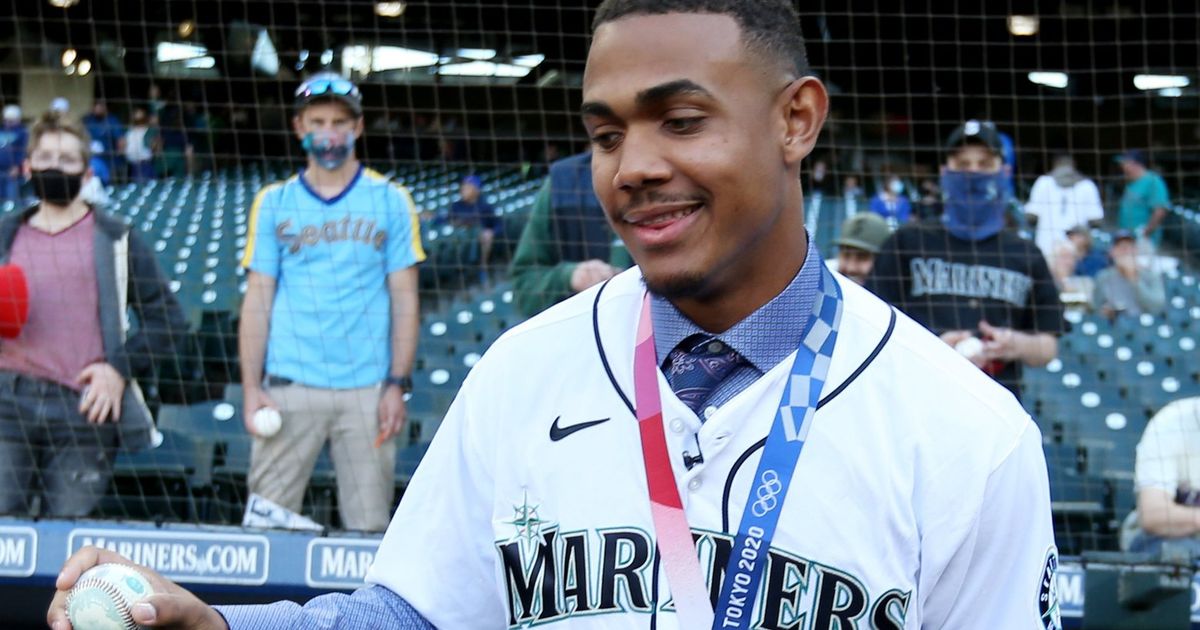 As Julio Rodriguez sat in a suite in right field on Friday night, he could feel the energy and emotion permeating a sold-out crowd of 44,169 people crammed into the seats at T-Mobile Park.

This made him think in turn.

Someday, probably next season, he would be on that emerald pitch, playing in front of a stadium packed with fans and doing everything possible to make them explode with glee.

“It was unreal, to be honest,” he said on Saturday. “Seeing everyone show up for this game yesterday made me want to be here even more.”

And when his pal and former teammate Jarred Kelenic snatched a brace from the wall in right field, scoring Abraham Toro in the third inning, the roar of the fans left him stunned.

“I had to stand there for real,” he said. “It was so electric. I love the way everyone reacted. “

Maybe the only negative thing was that the Mariners lost 2-1. Still, it’s clear that it left an unforgettable memory and a uplifting moment for the organization’s best prospect and No.2 prospect in all of baseball.

“It was my first time coming to a Mariners game,” he said. “I feel like it’s the best thing I’ve seen in my life. That’s what I want. The whole game, I imagined what it would be like to be there. I literally had chills to think of myself playing with these guys in front of 47,000 people.

There are fans who are upset that the man-child wasn’t on the roster in the last month of the season. Seattle has had discussions about whether to call it, but chose not to because of the minimal list extension being implemented.

There is no doubt about his talent. And his numbers this season were some of the best in baseball.

He split the season between High-A Everett (May 4-June 16) and Class AA Arkansas (June 26-end of the season), posting a combined slash line of 0.347 / 0.441 / 0.560 with 19 doubles, two triples, 13 homers, 47 RBIs, 43 walks and 21 steals in 67 games total. He’s missed long stretches this season to help the Dominican Republic win bronze at the Olympics. And this experience could be even more beneficial in its development.

“There was more pressure to play in the Olympics or like in qualifying because it was do or die,” he said. “… I feel like it was better for me to have my emotions in a difficult situation. It’s the Olympics.

The importance of accomplishment to his homeland left him proudly sporting the bronze medal on Saturday afternoon at T-Mobile Park.

“I can’t even put it into words,” he said. “As a team, we did something that has never been done in the Dominican Republic, so this was the first time that a team sport won something at the Olympics. I have to be a part of this story was amazing.

Rodriguez will not be playing winter ball in the Dominican Republic. He will go to the team’s facility for high performance camp in October and then to a training facility in Tampa. After a break for the holidays, he will return to Tampa for further training.

When he returns to Arizona in February, he plans to compete for a spot on the opening day roster.

“I’m going to go out there and compete, like I do all the time,” he said. “That’s what I do. Even if they say I’m out of luck, I’m still going to go compete.

The Mariners made two line-up moves ahead of Saturday’s game. One was planned; the other was more of a last minute need.

Early in the afternoon, infielder Donnie Walton was recalled from Class AAA Tacoma and reliever Wyatt Mills was fired at the Rainiers.

“We don’t really need a surplus of box guys at this point in the season,” manager Scott Servais said of the move. “We still have a few players to play and we kind of know who’s going to pitch in these games, and Donnie gives us some extra flexibility.”

But the need for a reliever reappeared when veteran right-hander Joe Smith was placed on the injured list for no reason given, meaning he’s linked to COVID-19. Seattle activated right-hander Andres Munoz from the 60-day injured list to take Smith’s place on the list. Munoz was getting ready for his last rehab outing with the Rainiers.

Sources said it was a rush to get Munoz to Seattle from Tacoma. He got the call about an hour and a half before the start of Saturday at 6:10 p.m.

206-464-2373 Where [email protected]; on Twitter: @RyanDivish. Ryan Divish covers the Mariners in Seattle and on the road. Look for her “Extra Innings” podcast and weekly Sunday mailbag during the season.