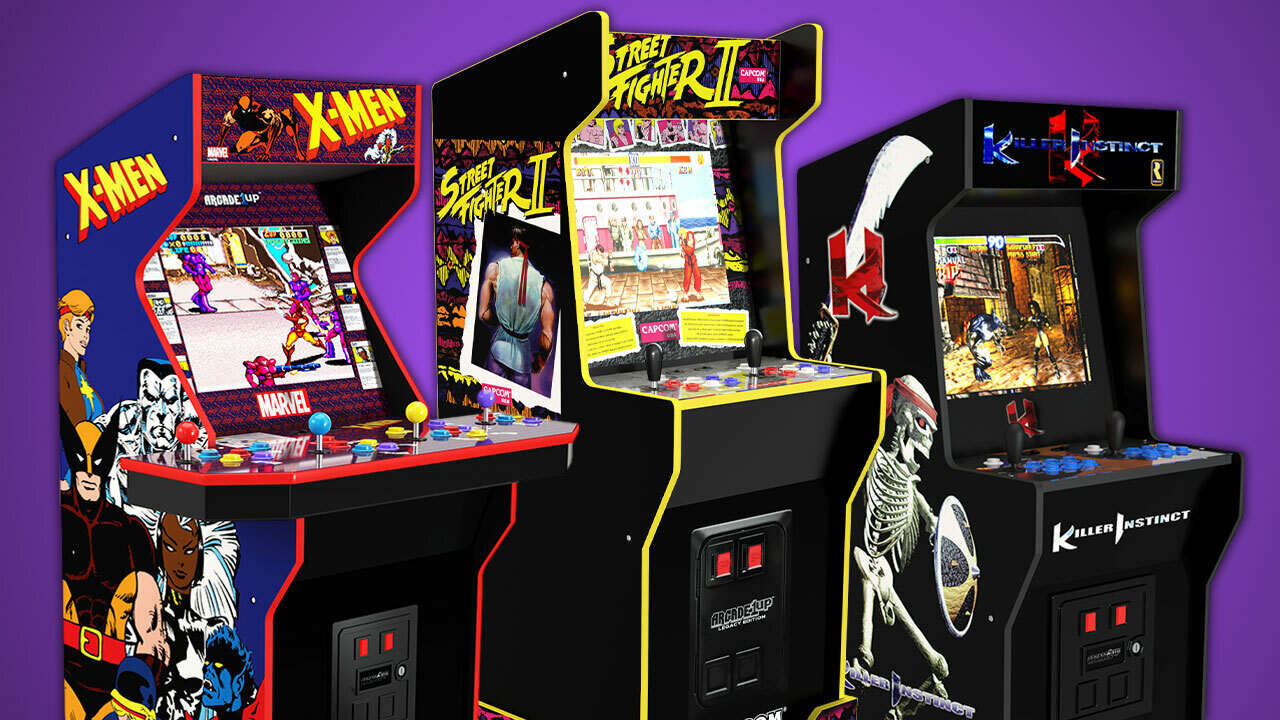 The best Arcade1Up cabinets to date

Since its debut a few years ago, Arcade1Up has evolved into a home arcade powerhouse, with dozens of different cabinets available that feature some of the biggest names in retro gaming. With so many choices, however, and with limited space in our homes, it can be difficult to decide which ones to buy. That’s where we come in, because we’ve compiled a list of the best Arcade1Up cabinets so you know which ones are worth your money. Whether you’re looking for a classic sports arcade game like Golden Tee or an intense fighter like Street Fighter II – or even a virtual pinball machine like Attack From Mars – there’s something for you.

Arcade1Up was largely responsible for the current boom in home arcades, starting with cabinets like Pac-Man and Galaga before expanding to also include light gun games, racing games and even board games. . The cabinets we’ve included in our list are from the brand’s 3/4 scale range, but there are also a number of counter gift cabinets as well as wall mounted party cabinets with some of the same sets . Going forward, things will also get even more awesome, with Marvel vs. Capcom 2 and NFL Blitz among the most exciting upcoming releases.

The only product on this list that isn’t actually an arcade game, the Arcade1Up Infinity Game Table is a perfect choice if you love having family game nights. The unit functions as a digital board game from brands such as Hasbro and Parker Bros., allowing you to play Monopoly, Scrabble, Battleship and many more games without having to worry about putting away a box or clean the parts. It also offers online play, so you and a friend can have a virtual game night and have absolutely no way of seeing each other’s pieces. Along with board game content (and online store to get more games you love), it also supports coloring books, making it a great option for keeping young kids busy during the day.

Sports games in the arcade have often been pretty “arcade” affairs, with over-the-top abilities and characters. Golden Tee is an exception to this trend, and Arcade1Up has successfully transitioned the series to home arcades. Following on from the slightly smaller Golden Tee cabinet it released a few years ago, Arcade1Up produced the Golden Tee 3D Edition machine, which ditches the riser for a one-piece design with a 19-inch screen. The cabinet comes with five different Golden Tee games, a 3-inch trackball, a light-up marquee, and Wi-Fi leaderboards to see how you stack up against competition around the world. With a classic and understated design, it will fit perfectly into any golf enthusiast’s game room.

Ridge runner! Riiiiiiidge Racer! Arcade1Up’s second running cabinet (the first was Out Run) featured a slightly more graphically impressive lineup of games. The stand-up setup is arguably the best option here, as it’s best suited for adult players alongside kids, and it’s one of the flashiest systems Arcade1Up has created. The marquee is positioned above the rest of the cabinet, and the bright red color screams the rapidity. With a rumble-equipped steering wheel, working gearshift and five different racing games to choose from, it’s a great addition to a games room, especially if you already have more “general game” cabinets with the classics on it.

There are currently three different virtual pinball machines available on Arcade1Up, each offering a full digital pinball experience with haptic feedback. Of the three available – Star Wars, Marvel, and Attack From Mars – it might seem odd to choose Attack From Mars. However, it is the only one of the three that contains a collection of all real animated pinball tables in virtual form. Not only that, but these are tables from Williams, arguably the most acclaimed pinball brand of all time. The titular game is joined by titles like Junk Yard, Fish Tales, Hurricane and Medieval Madness, ensuring any pinball lover will be happy for a long time.

Street Fighter II had been one of the first Arcade1Up systems released, but we are not talking about this first version. Instead, the cabinet we chose is the Street Fighter II Big Blue model. The cabinet is, as the name suggests, quite large and it has Wi-Fi multiplayer so you can prove yourself the best against other Big Blue players around the world. The blue cabinet features an image of M. Bison and Ryu on the front, and the classic artwork on the control panel will keep any newcomer up to date before heading into a match. It’s not just Street Fighter 2 and its many updates on the cabinet, with other games like Darkstalkers 3, Eco Fighters, Knights of the Round and Saturday Night Slam Masters all included as well.

One of the most legendary video games of all time, Pong is also incredibly easy to pick up and play. This makes it a great choice for a game room if you regularly have guests over, and the Pong 4 Player Pub Table is one of the best ways to play it. As the name suggests, it’s basically a standing bar table with a screen in the middle, allowing players to enjoy games like Pong, Pong Doubles, Warlords, Super Breakout, and more. It comes with a clear lid on top so you can grab a drink without worrying about accidentally ruining it, and the orange and burnt yellow color scheme just screams “retro.”

Based on the iconic 20th anniversary cabinet released in 2001, the Ms. Pac-Man/Galaga Class of ’81 machine is ideal if you love both legendary games and can’t choose between them. The cabinet sports a split design, with the left representing Ms. Pac-Man and the right representing Galaga. You get way more than just those games, though, with other included titles like Dig Dug, Galaga 88, Mappy, Rolling Thunder, and Rompers included. This particular cabinet comes with Wi-Fi support for leaderboards, and given how much of a focus these games were on high scores, it’s a feature you’re sure to use a lot.

One of Arcade1Up’s cheapest cabinets, released as a kind of mashup of its previous Capcom systems, the Capcom Legacy cabinet is perfect if you only plan to buy one machine. Sporting a beautiful Street Fighter II design that also extends to the custom riser, the Capcom Legacy cabinet features multiple versions of the main game alongside Strider, Ghosts ‘n Goblins, Final Fight, 1944, and more. Rather than having a list of games on the front, it comes with a coin holder printed on the pickguard, although obviously you don’t need any quarters to start beating your buddies like Ryu or Chun- Li.

Arcade1Up currently offers a few different small arms cabinets, allowing you to turn your game room into a shooting gallery. Of the ones available, the best are Big Buck World and Big Buck Hunter – essentially the same machine but with different artwork depending on which retailer you buy it from. These cabinets come with several hunting games, and the gorgeous design is a little flashier than most other home arcade products. Because the machine includes an LCD screen instead of the CRT monitors seen on classic light gun games, the guns themselves use Sinden technology for precise aiming and that classic arcade feel.

Atari has created some absolute classics in the arcade – arguably better games than it even had on the 2600 console. One of the best was Star Wars, and in this Arcade1Up cabinet are all three original games in a large closet. The first two, Star Wars and The Empire Strikes Back use minimalist vector graphics to paint an illusion of first-person space combat, and the simple sound effects give it a classic charm. The latest, Return of the Jedi, is a different game with more colorful visuals. Rather than a joystick and button setup, Star Wars comes with a nifty flight yoke and some of the best artwork in any Arcade1Up cabinet.

He is oooooo fire! One of the most iconic arcade games of the 90s, NBA Jam has gotten several home console ports over the years, but none compare to the original arcade release. The two-man basketball game is so action-packed and intense that it bears little resemblance to real basketball, but that’s not really the point. Multiple people can compete in games to see who is supreme on the pitch, and with Wi-Fi enabled, you can even challenge people from all over the world. Alongside NBA Jam, the cabinet also includes NBA Jam: Tournament Edition and NBA Hangtime.

The products discussed here were independently chosen by our editors. GameSpot may get a share of the revenue if you purchase something featured on our site.