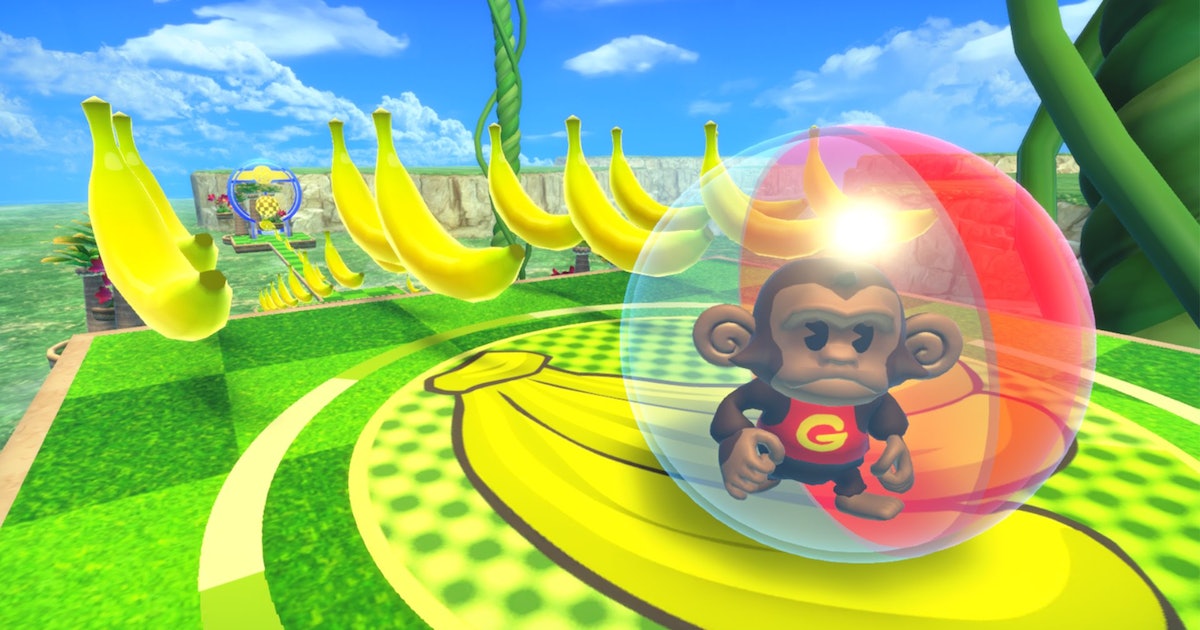 The Super Monkey Ball series is the most underrated Sega franchise of all time.

While the franchise began with two big games, it never reached Sonic the Hedgehog or Yakuza popularity due to a wave of spinoffs and fancy sequels. Super Monkey Ball Banana Mania is a nice remaster of Super Monkey Ball 1, 2, and Luxury, the best titles in the series.

This Sega franchise uses the unique and charming concept of tilting stages to roll monkey-filled balls into bananas and goals. Part racing game, part puzzle game, part board game and part platform game, the Super Monkey Ball series is unlike any other.

Banana mania reminds us of what the series looked like in its heyday, good and bad, and hopefully signals the start of a new era for the franchise. For those looking for a game with short but addicting levels or a new party game to try with friends, Banana mania is an amazing option, especially on Switch.

Banana mania contains over 300 stages of the franchise’s first three console games. For the series titling gameplay the series is known for, head right to “Main Game” on the main menu. From there, try out the Story Mode which brings together dozens of stages from the history of the series while telling the story of Super Monkey Ball 2.

Story Mode features a gradual difficulty curve, slowly getting the player used to physics and controls before throwing some really wild stage gadgets (like platforms that bend and unfold like worms) at them. To win, you simply tilt the level so that the player character rolls into a goal and doesn’t leave the stage within a time limit. Think of it as a wooden tilted board game that comes to life.

The early stages of Story Mode ease the player into this concept, and the addictive gameplay loop will grab players in the first world. Banana mania also includes some of the show’s most frustrating stages, which can border on injustice. Fortunately, the game offers an assist mode which gives novice players the option of slowing down the game.

Story mode only scratches the surface of what Banana mania has to offer. Challenge modes based on each Monkey Ball game feature some of the most demanding stages in the series. Players can also spend the points earned while playing to purchase special modes, like the one where players have to collect all the bananas in a stage before clearing an objective.

While Banana mania is a solid solo experience, it’s also a lot of fun with friends thanks to its Party Games. Banana mania includes all minigames from Super Monkey Ball Deluxe. Some of them tackle sports like golf, bowling, and baseball, while others completely change the formula and transform Super monkey ball in a racing game or a brawler.

By far the best and most iconic mode is “Monkey Target”.

Players hurtle down a slope to gain momentum before being launched into the sky. From there, they must hover and land on the area of ​​a platform that gives them the most points. The competition for the highest score with friends is captivating and cements Banana mania like an entertaining board game.

Banana mania feels totally familiar, but the visual upgrades modernize it enough for the present. The main game stages got the most attention, but the Party Game level textures didn’t get as much love.

The menus are elegant and the modes are plentiful, but an option to play Super Monkey Ball 1 and 2The original campaigns as they were would have been a welcome addition.

The physics of this remake are nice, although the camera can be restrictive at times. This sometimes makes it difficult to see certain steps. This shouldn’t be a big deal for those used to the games, but it might confuse new players.

While the classic Monkey Ball cast is all present and taken care of, Banana mania also features many guest characters. Players can purchase costumes based on other video game characters like Sonic and Tails, Kazuma Kiryu from Yakuza (which is made by the same developer), Morgana from Persona 5, and more.

The Super Monkey Ball series is utterly charming but long ignored. As such, it’s refreshing to see the franchise get a remastered treatment with more care than even The stars of Super Mario 3D.

Banana Mania is worth a visit for those who always wanted to try Monkey Ball or have fond memories of playing the series as a child.

Difficulty spikes and a wobbly camera will sometimes cause players to throw their controllers across the room. Yet this otherwise compelling remastered package demonstrates why Sega needs to make Super Monkey Ball one of its core franchises.

REVERSE VIDEO GAME REVIEW ETHOS: When it comes to video games, Reverse values ​​a few qualities that other sites cannot. For example, we care about hours rather than money. Many new AAA games have similar costs, which is why we place more emphasis on the gaming experience than on price comparisons. We don’t enjoy the grind and scavenge quests as much as we do the games that get the most out of each level. We also care more than most about the game’s storytelling. If the world of a video game is rich enough to fuel sociological theories about its government and its characters, it’s a game we can’t stop thinking about. , regardless of its price or popularity. We will not strike. We won’t rate an indie game the same way we rate an AAA game produced by a team of thousands of people. We review the games based on what’s available on our consoles at the time. And finally, we have very little tolerance for unwanted science. (Magic is always OK.)