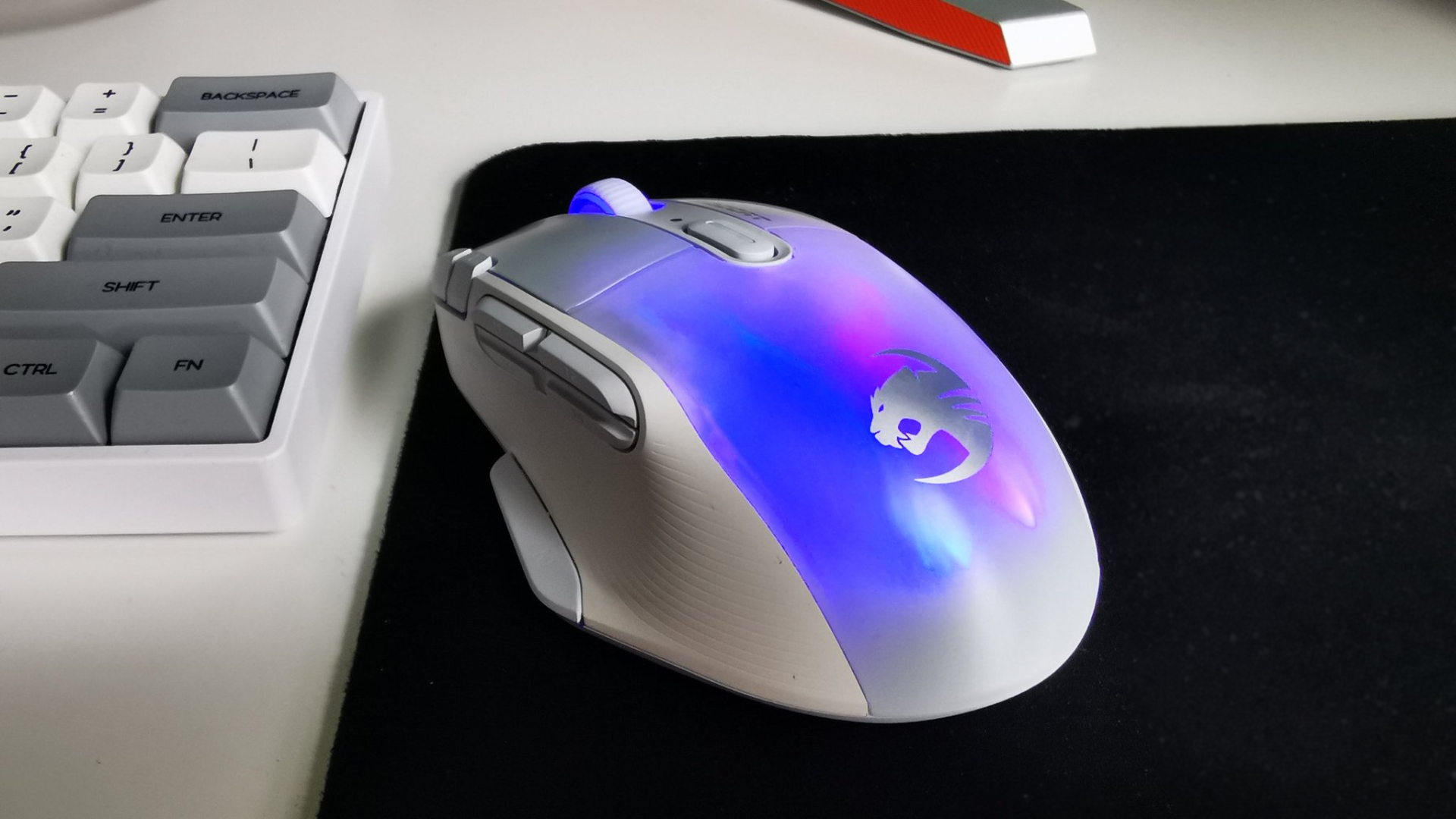 The Roccat Kone XP Air gaming mouse is best described as a peripheral peacock. Don’t get me wrong, the reliable rodent has some impressive features in its sleek, ergonomic shell, but its unique take on RGB is what helps it stand out among competitors like Logitech and Razer. If you’re looking for a palm-sized light show, the XP Air might be the perfect clicker for you, though it comes with a premium price tag attached.

As you might have guessed from the name, the Kone XP Air is a wireless gaming mouse, which means it’s susceptible to all the caveats usually associated with cord-cutting. Luckily, Roccat is on the ball when it comes to wireless issues, and additional features like an RGB fast-charging dock help protect the device’s $169.99 USD / £149.99 GBP asking price from scrutiny. .

Before we dive into aesthetics and performance, let’s review what you actually get inside the Roccat Kone XP Air box. Provided it hasn’t turned into an actual rodent and crawled its way out of the packaging, you should find the mouse, a matching charging throne, a “Phantomflex” USB-C charging cable ” and a dinky wireless dongle.

The Kone XP Air also uses Bluetooth connectivity, and we’ll see why that’s handy soon. However, I’m a bit disappointed that the package only contains one USB-C cable, especially since you’ll need it to connect to the fast-charging station.

Of course, the lack of an extra cable isn’t a deal-breaker, especially if you’re mostly staying at your gaming desk. Still, that means that if you fancy turning the mouse into a wireless clicker, you will have to disconnect the wire from the docking station, and it looks a bit like an unfortunate faff. 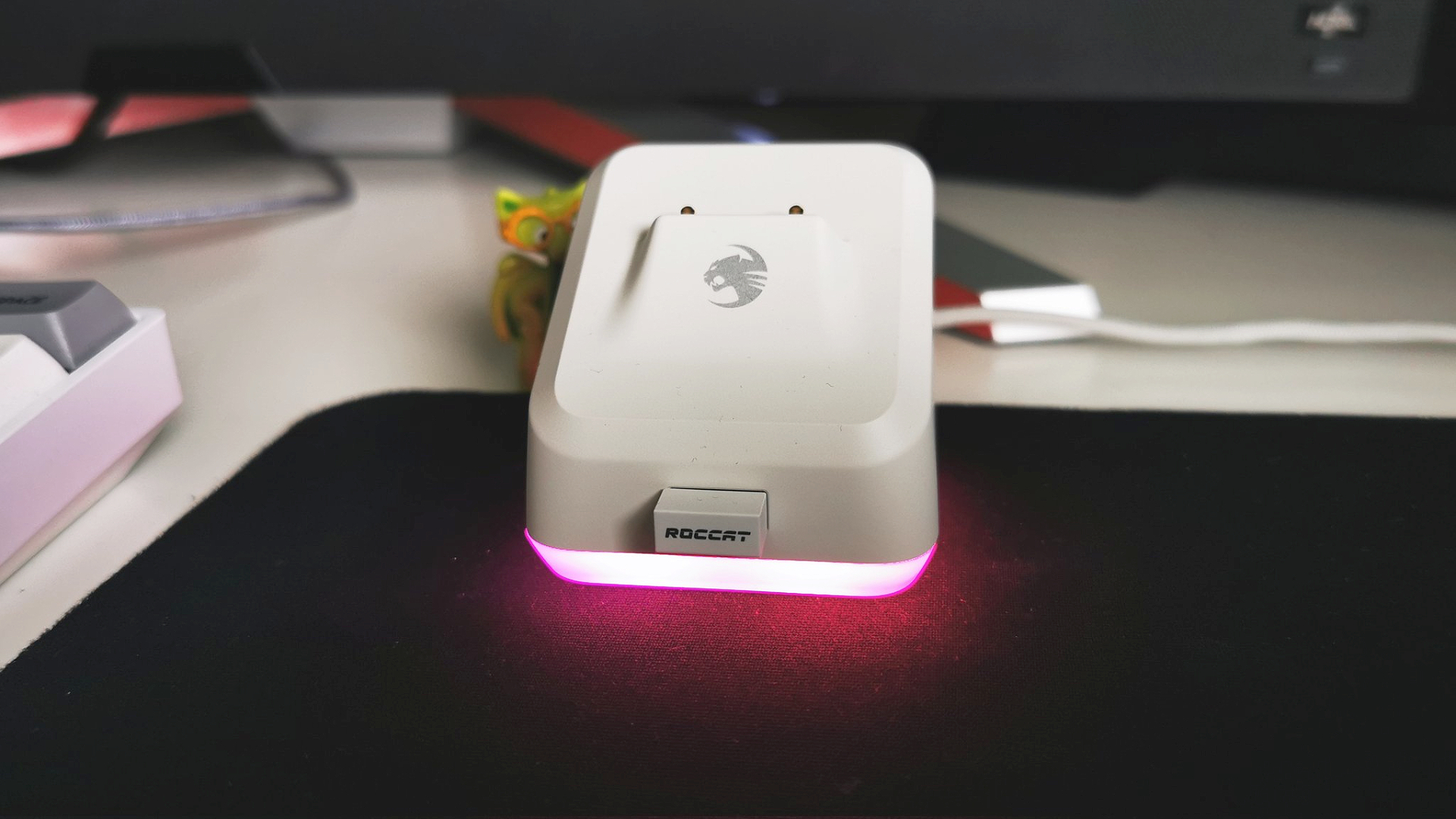 Of course, complaining about wired connectivity on a wireless gaming mouse is a bit of an Alanis Morissette move, as my cable issues are ironic. The Kone XP Air’s wireless setup actually helped me forget that tethering is a thing, as the front dock port means you can hook it up and dongle it to your gaming PC at the using a single USB.

Roccat’s streamlined approach to connectivity makes all the difference, especially as it adds a degree of configuration versatility, and it certainly contributes to my long-time quest for proper cable management. Believe me, if you have your own personal Spaghetti Monster harassing your feet while you play, you’ll understand why this matters.

To the touch, the Roccat Kone XP Air feels light, but it’s far from the lightest gaming mouse on the market. Weighing in at 99g, it’s actually a bit of a chonker compared to the feathery SteelSeries Aerox 3 Wireless. That’s not to say a bit of heft is a bad thing if, like me, you’re used to metal-clad classics like the Corsair Vengence M65, because you won’t accidentally throw it from your desk while playing Cyberpunk 2077 to the first time.

It’s worth noting that while the Kone XP Air isn’t the lightest mouse, it will still glide across a gaming mousepad like an arcade hockey puck. The heat-treated PTFE pads on the bottom help each hand contract and glide smoothly, and that helps to put down the fact that it weighs almost 100g. 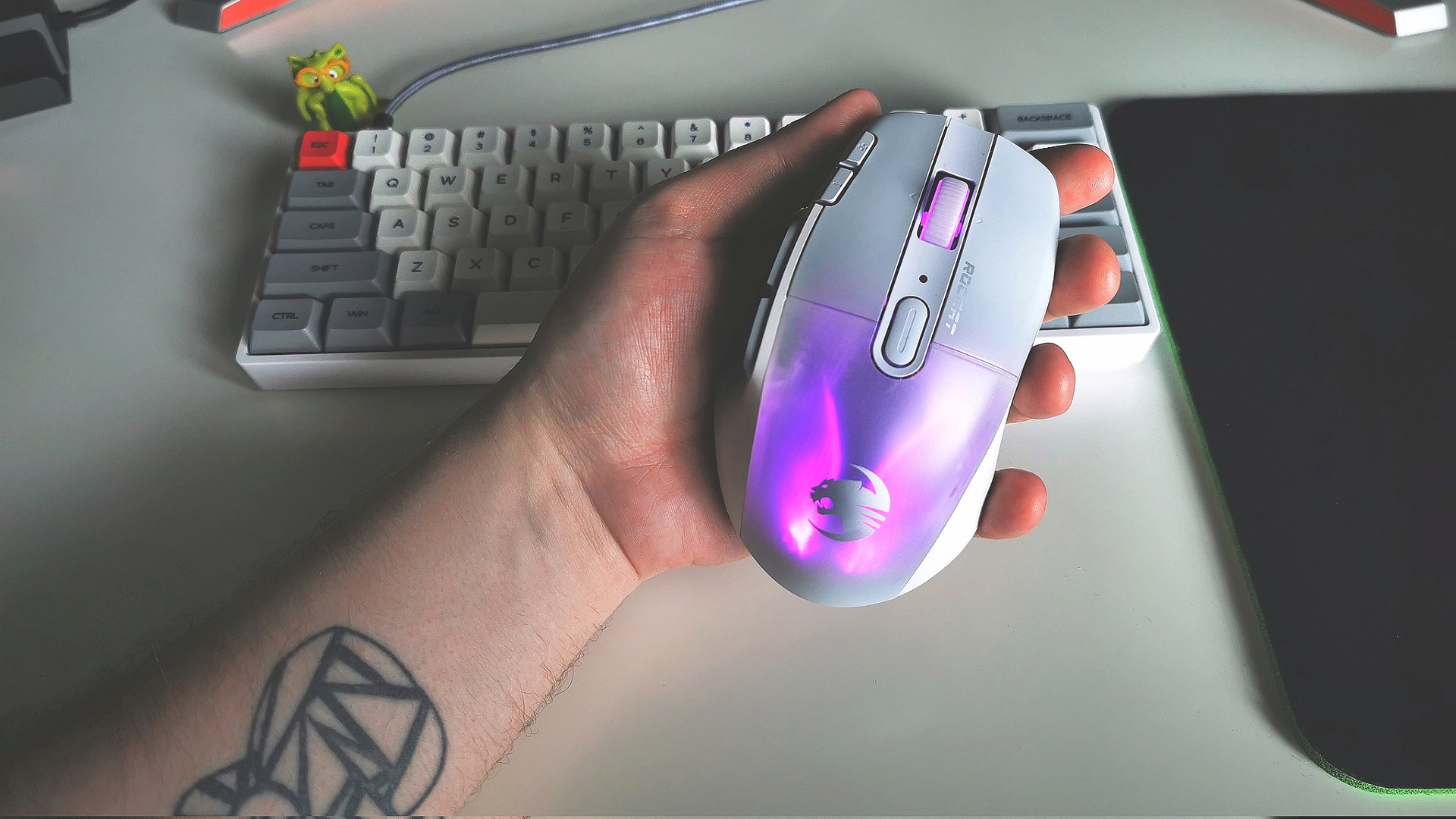 Sliding ear cushions aren’t the Kone XP Air’s only ergonomic benefit, as its contoured shape tackles natural comfort. Its thumb lip resembles the flared base of the Logitech G502 Lightspeed, but Roccat’s clicker is distinct enough to avoid the deja vu design, since the lip houses the nifty easyshift mouse button, it’s much easier for users to reach. small hands.

Speaking of which, the Kone XP Air comes equipped with 29 programmable buttons. What is that? You can only see 15 with the mouse? Well, that’s where the easyshift rocker comes in. Clicking the default thumb button provides each press with a secondary mapped function, which effectively doubles the number of actions you can perform with one hand.

Granted, I’m not one of the biggest MMORPG enthusiasts out there, but I’m pretty sure having 29 mapped mouse buttons would kick Final Fantasy XIV. Even still, if you prefer the smell of gunpowder in the morning, you can remap the easyshift key itself and turn it into a deadly grenade launcher. This will reduce the number of functions available to 15, but the feeling of wielding explosive mayhem with muscle twitching is arguably worth it.

Alright, let’s talk about the dazzling lights of the Kone XP Air, because its RGB ribs look like futuristic biotech. With five customizable zones and a range of different patterns, fans of light games will have a blast with this mouse. There are bound to be gamers out there who outright hate Roccat’s artistic 3D lighting, but if you’re looking for a take-home LAN showstopper, this is it.

That’s not to say Roccat’s lighting is aggressive, as it’s relatively diffused thanks to the device’s frosted, semi-translucent shell. Believe it or not, it’s actually quite stealthy compared to the wired Kone XP, even though it looks like Godzilla charging an atomic heat beam. Personally, I think its LEDs need a brightness boost, as it’s hard to appreciate ribbed RGB shinigans when sitting near a window during the day. 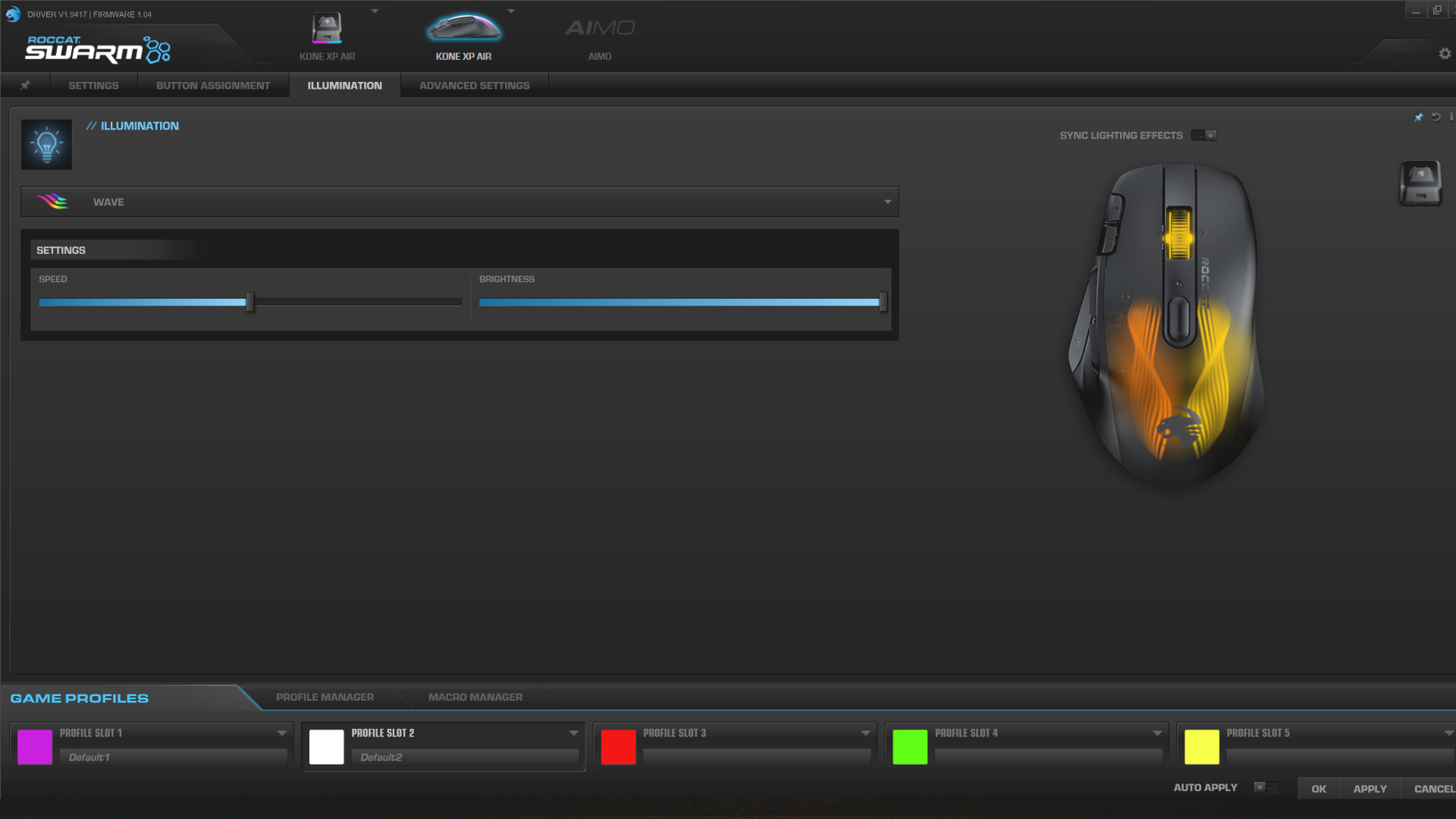 Roccat’s companion software provides access to a whole bunch of performance and aesthetic settings, but it’s unfortunately a bit rough around the edges. From a design perspective, the layout of the toolkit is a bit overwhelming, and locating specific settings isn’t always intuitive.

That said, once you know where everything is, you’ll have an easier time tweaking things. My real concern with Swarm is its sync temperament, as sometimes applying settings won’t do anything at all. It’s not a constant hiccup, but it did happen several times during testing, and it’s irritating enough to mention.

Using a mouse with a decent DPI and a fast 1000Hz polling rate can help your FPS gaming abilities flourish, and the Kone XP Air is no exception. Out of the box, the mouse feels precise and natural, but you can really dial things in to please your palm using the Roccat Swarm customization suite.

The Kone XP Air’s specs are matched by nicely clicky optical switches, and Roccat says they’ll apparently withstand 100 million clicks. That’s a lot of shots fired, spells cast, or whatever you’re doing on your gaming PC, so it will potentially last long into the future. It might take a while to know if they’ll truly live up to these claims, but the switches certainly feel precise and sturdy.

Naturally, pretty lights and gaming PC performance require power, and the Kone XP Air has an RGB fast-charging dock alongside it. Cradles aren’t always a great extra, especially if you don’t have time to let your gaming mouse hang out, but Roccat’s little stand can deliver five hours of charge in just ten minutes.

Despite my best efforts, I struggled to create a natural “battery drain” scenario when testing the Kone XP Air. This is largely thanks to the docking station’s fast charging capabilities and the battery’s ability to charge, the latter compensating for my ADHD-adjacent tendencies.

In other words, I actively avoid battery-powered devices because I rarely remember to charge them, but this setup means that if I manage to connect the Kone XP Air even once a day, I’ll still have enough juice to get by. The fact that its base floats with a pleasing RGB reminds you that it’s there too, and the mouse glides over the cradle’s two prongs with minimal effort. 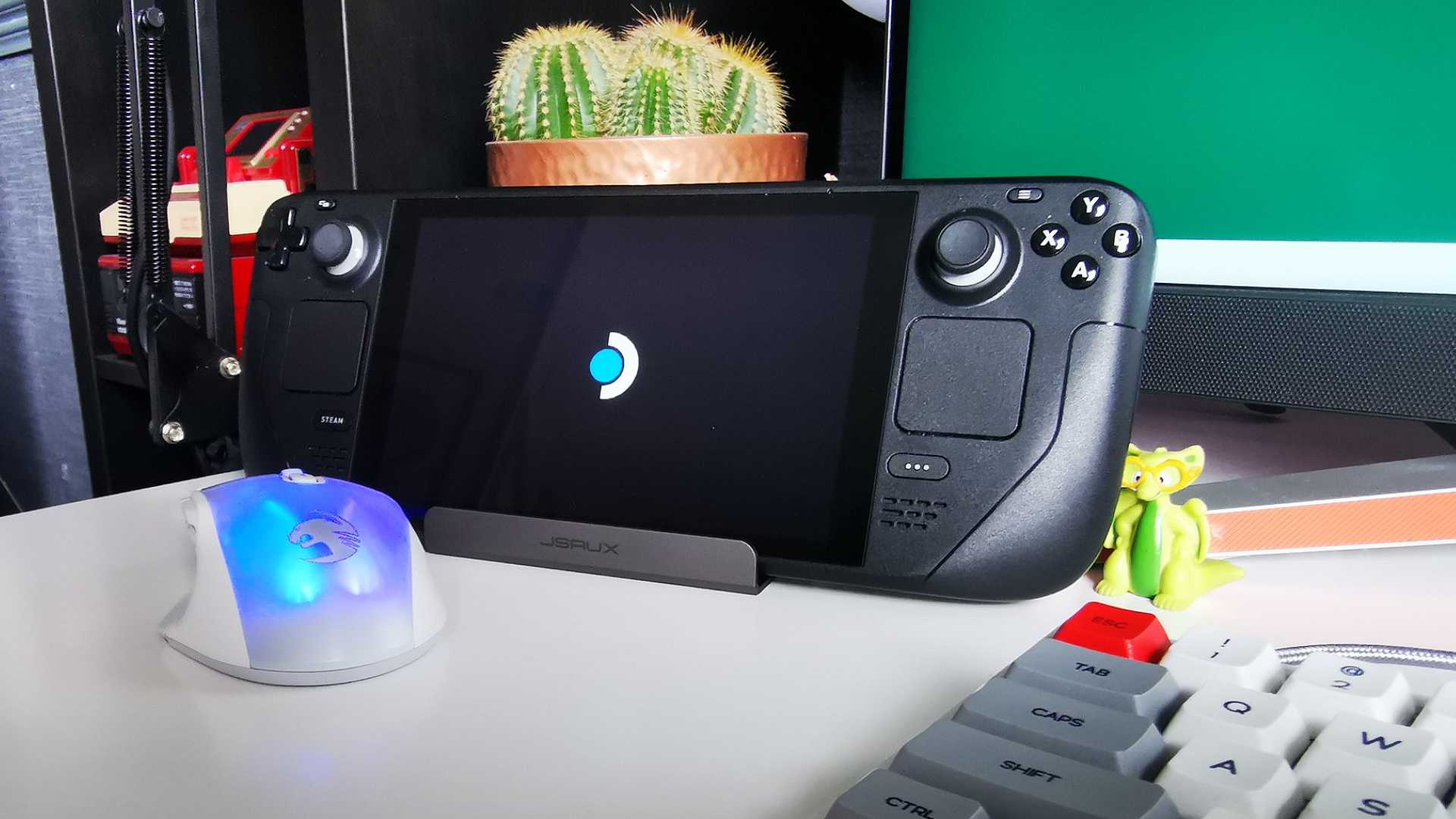 It’s easy to forget that the Roccat Kone XP Air has Bluetooth connectivity, but its inclusion means you can switch between secondary devices like the Steam Deck and a gaming PC equipped with the 2.4Ghz dongle. Again, having to disconnect and reconnect USB cables is one of my pet peeves, so being able to use the mouse on the Valve handheld at the flick of a switch is remarkably convenient.

The gaming mouse scene is a crowded cage with many reliable rodents living there, and the Roccat Kone XP Air earns its living. If you’re not really concerned with RGB, you could probably buy something like the Razer Viper Ultimate Hyperspeed for less, but you’ll also miss out on fast charging and a wonderful button mapping setup.

Simply put, if you’re looking for an accessory with a unique RGB flair, check out the Kone XP Air. If you’d rather invest in a wireless gaming mouse with a premium kick, Roccat’s clicker might also tick a few boxes, but upcoming competitors like the Razer DeathAdder V3 Pro will ultimately deliver more performance.

An excellent high-end gaming mouse that offers respectable specs and a unique sense of RGB dazzle.

@!#[email protected]! This is the Q*bert x Replicade from New Wave Toys