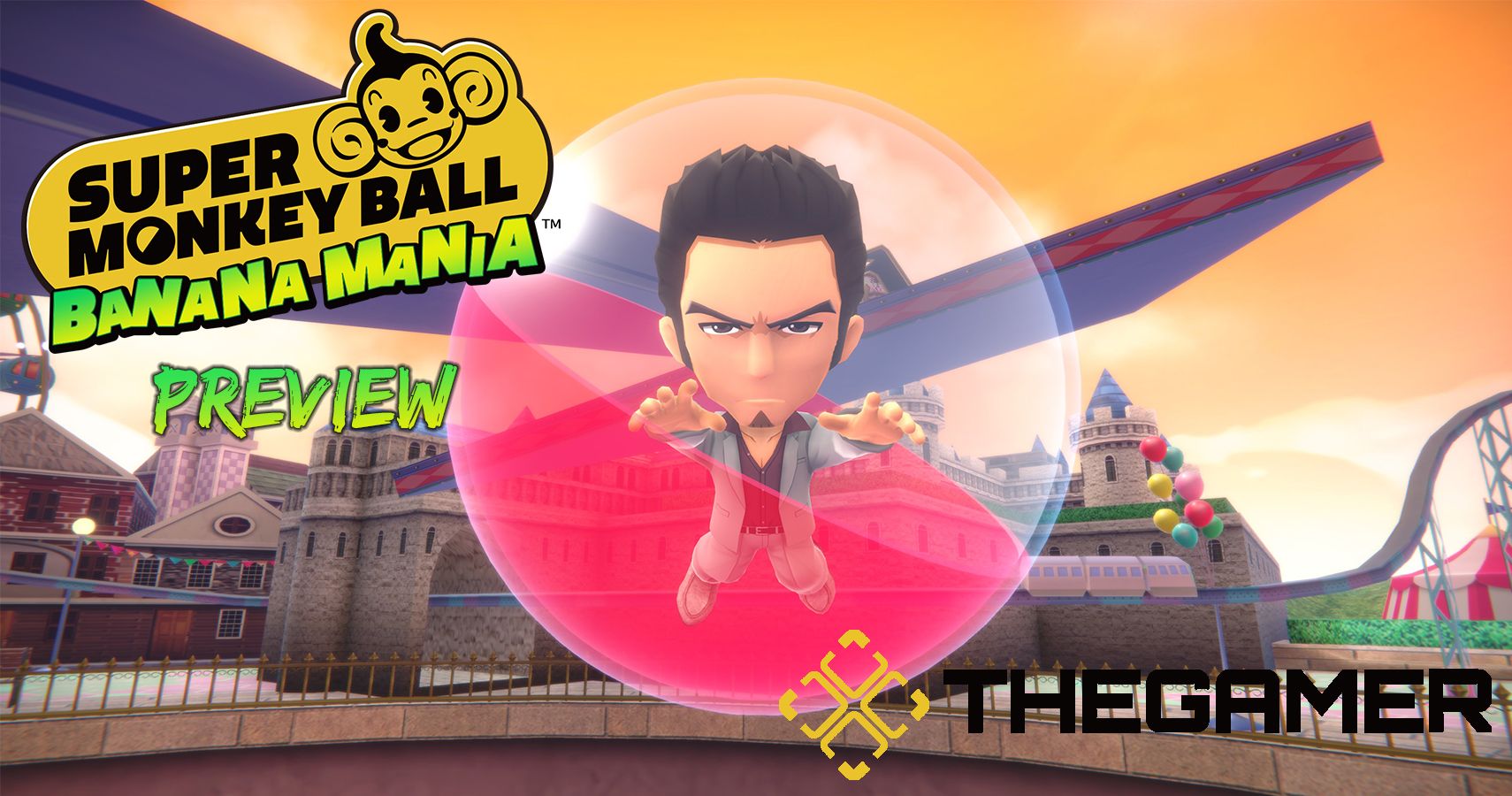 Honestly, I can’t remember the last time Super Monkey Ball was a relevant series for Sega. While the company has re-released the Wii exclusive Super Monkey Ball: Banana Blitz in HD format, it seems like an eternity since AiAi and his friends jumped into their gerbil balls and rolled through deadly mazes. Once the launch title for the GameCube that became an overnight success, Sega has since moved on to greener pastures.

Fortunately, time works in a loop. What’s old is new as the saying goes, and that brings us to the upcoming release of Super Monkey Ball Banana Mania. Essentially an HD port of the Xbox / PS2 compilation titled Super Monkey Ball Deluxe, this latest HD port dates back to the start of the series to provide the definitive version of the classic Monkey Ball. You get a metric ton of levels here, something up to 300 stages. There are also a plethora of new characters to unlock, including Dojima’s legendary dragon Kiryu Kazuma of Yakuza fame.

Sega was on to something with Banana Blitz HD a few years ago, but Banana Mania could really be the best release in the series yet.

From a purely marketing standpoint, Banana Mania sounds like a slam dunk. Featuring all Super Monkey Ball Deluxe levels as well as a staged mode, it beats every other game in the series in terms of the number of stages. All of Deluxe’s ​​ridiculous party minigames are present and catered for, as is a new co-op multiplayer option. If you like to challenge your friends, now you can team up with them to help each other complete the levels.

This is all well and good, but what if the gaming sensation is turned off? What has detracted from the Super Monkey Ball sequels beyond the original few games is that the ball physics are drastically different from those original titles. There’s also the introduction of unnecessary gadgets like the Wii scale and touchscreen controls on mobile, but none of that is here. Banana Mania is more refined than Banana Blitz HD, accurately recreating the strict controls of the original.

In perhaps the best shot, you even have some camera control this time around. While playing the game with just one joystick is sufficient, being able to stop and rotate the camera a bit helps you spot where you may need to go during some of the more intense levels. It’s a bit awkward when you’re moving around (the camera tries to get behind you at all times), but you can technically use it on the go. It really helps to make the game more modern.

Not that you would play Monkey Ball for its story, but there is some sort of “campaign” to be had. Taking you through the original 300 levels of Monkey Ball 1, 2, and Deluxe, each segment is punctuated with a fun little animated cutscene that attempts to set the stakes for your adventure. A dastardly monkey causing trouble and stealing your bananas? Actually, I’m not quite sure, but I like the way things are framed from the point of view of the cast watching a Saturday morning cartoon.

Once you step into the game, there is no more pomp and circumstance about anything. An advertiser simply counts to 1 and then tells you to go. Super Monkey Ball is easy enough to understand that you don’t need a tutorial and it’s good that there isn’t one here. I don’t remember if the first level of Monkey Ball was presented exactly like here, but the campaign seems to be made up of arranged levels rather than classic levels.

Don’t get into Banana Mania while waiting for The Last of Us Part 2 here, but those who aren’t skilled in nervous arcade games like this will find accommodating options to help them get through difficult levels. At each level of the game, if you fail about 10 times, you will receive a prompt for “Help Function”. This can be activated at will from the pause menu, but it essentially doubles the time for each level and gives you a slow motion button. It’s very minor, but it can make all the difference in the world when you wobble on a very thin ledge.

In the Points Store (where you go to unlock additional game modes and characters), you can also activate a jump option. This will break a lot of levels, but it’s another cool touch for those struggling with specific segments. Having the ability to jump right over things is great, although I chose to ignore them for story mode.

What is more interesting are modes like “Golden Banana” and “Reverse”. and give you a new goal beyond just reaching the goal. In Golden Banana, you will have to collect all the bananas in a level to complete it. The reverse is for all stages of story mode in reverse, except for the ones where you descend platforms in a scene.

That’s a lot of content to offer, functioning almost like a complete sequel to the original games instead of just a remaster. Super Monkey Ball has always been a speed game, so it probably won’t extend lifespan beyond around 10 hours, but I’m surprised at the number of new lessons here. Seeing old courses reconvert also gives you the ability to master your routes for challenge mode while working on a different objective.

The best part: None of this is unlockable via the microtransaction DLC. All the currency needed to catch new costumes or characters is acquired by beating levels. Catching the bananas in each level to give you a single coin while completing the levels will earn you between 100 and 1000 depending on whether or not you have completed certain level missions. It’s a nifty way to add replay value.

Super Monkey Ball Banana Mania looks like a blast from the past in the best possible way. Back in the days of the PS2, the developers did their best to innovate with new franchises that were reminiscent of the golden age of arcades and Monkey Ball was the king of the jungle. Maybe this won’t appeal to young players looking for more story substance with their gameplay, but my old-school loving heart is already in love.

Peter is an aspiring writer with a passion for games and fitness. If you can’t find him in front of a match, you’ll likely find him pumping iron.