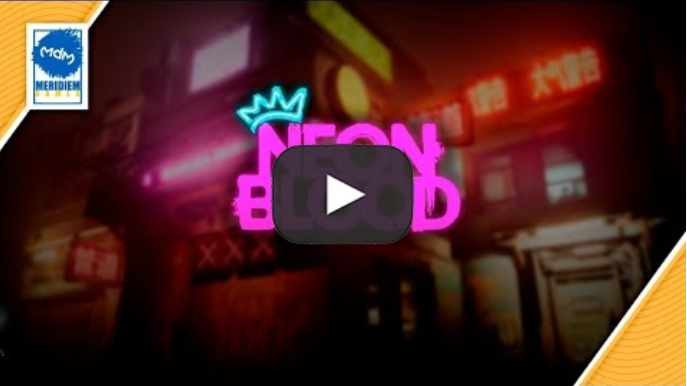 
The year is 2053, and after the devastation of World War III, humanity has been reduced to existing in a single macropolis called Viridis, which is made up of two cities, the luxurious Bright City and the dystopian Blind City.

Axel McCoin, a Blind City detective, finds himself motivated by his ideals to rebel against the injustices caused by the social separation between the two cities. Motivated more by the social inequalities that exist in society, he becomes a symbol of revolution for people who share his ideals.

During his adventure, Axel will encounter powerful allies who will aid him in his quest as well as enemies who will stand in his way, such as Ruby Emerald who will do everything in her power to derail Axel’s plans.

neon blood will launch this winter for PC, PlayStation and Xbox consoles and Nintendo Switch in 2023. Fans can now wishlist the game on the PlayStation Store and Steam.

Meridiem Games is an independent publisher and distributor of video games for all platforms. The entire Meridiem Games team is committed to meeting the demand of players fond of physical editions, titles such as Fahrenheit 15th Anniversary PS4, KUNAI Day One Edition NSW, Daymare: 1998 Black Edition PS4, Pang Adventures Buster Edition PS4 /NSW etc They were released in their physical edition thanks to Meridiem Games. www.meridiem-games.com


We are ChaoticBrain Studios, an independent video game studio from Madrid that has just started this adventure, which is to develop our own video game. We are a small studio formed by 2 people, who after finishing our studies, we had the brilliant idea (Spoiler, no) to develop a JRPG as our first video game. And with that premise in mind, and thanks to our love for the Cyberpunk theme and great video games like FFVII, Octopath traveler, and Cyberpunk 2077, the idea for Neon Blood was born. And that’s how I met your mom… sorry, that’s how I met ChaoticBrain Studios.