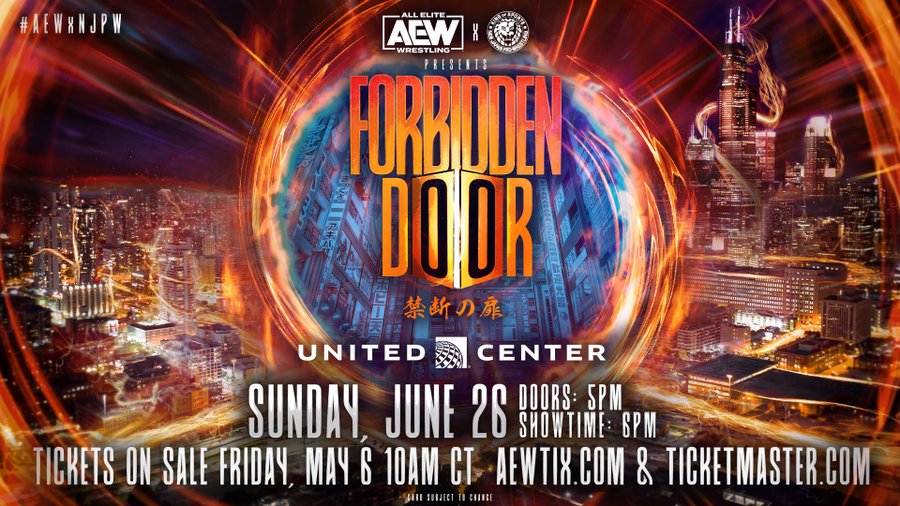 McGuire Monday: AEW and NJPW announce The Forbidden Door event, but is it still possible to have a dream match?

A few years ago I purchased the Teenage Mutant Ninja Turtle arcade game console. It wasn’t genuine – just one of those knockoffs from Arcade Up. I was excited, though, because whenever I went to an arcade as a kid, these ninja turtle games (as well as any wrestling game that was offered) were my favorite.

After assembling the console, I started playing it, expecting to beat the first two levels and then be forced to start over. But then something happened that I didn’t expect: there was no game over. Because there were no places to insert changes into the game, the version I have permanently gives you infinite lives.

Or, in other words, as long as you have time to spare, you can beat the game.

The pleasure almost immediately dissipated. I didn’t want the end of this game that I spent hours trying to beat when a kid just gave it to me. I wanted it to mean something. I wanted to win it.

…I started thinking about the AEW/NJPW Forbidden Door pay-per-view set in a few months.

In many ways, it feels like Tony Khan has unlocked the cheat code in pro wrestling, and I’m not so sure that’s a good thing anymore. He’s taken every aspect of the wrestling world that isn’t WWE and he’s brought it all together to create this mix of talent and as a result, the possibilities are endless.

I am not insisting that this is a bad thing. If you want to hike the whole One Love route, that’s fine. It is better to work together than to work against each other. If the wrestling community is one big, happy family, everyone wins, right?

Perhaps. But I also think competition has value and I certainly think borders have value. What made WCW vs. WWE so much fun in the late 90s? You never knew who was going to jump where and often fantasized about what might be. Imagine the Undertaker against Sting. Or Stone Cold versus a healthy Hulk Hogan. These ideas were fun to think about, mostly because it seemed impossible for them to ever happen.

THE IRON IS NOT HOT

These days it seems like the second someone throws a fun match idea into the Twitter verse, we have a clock running until someone (most likely Tony Khan) will. Reserve. And the thing about it is, maybe sometimes those dream matches are best left to our imaginations.

Take a look back at when AEW really started to kick off, then fast forward a bit to when we got our first glimpse of New Japan talent in an AEW ring. If memory serves, we got our first taste of it when KENTA worked on a short program with Jon Moxley between AEW Dynamite and NJPW Strong. It featured an AEW television tag match which saw KENTA and Kenny Omega take on Moxley and Lance Archer.

At the time, novelty was fantastic. It wasn’t just about seeing a New Japan star in AEW; it also saw Moxley appear in an empty NJPW Strong arena – a show that badly needed star power at the time. It honed the palate for a relationship that many fans of both companies wanted to see happen. The fantastic booking was kicked up a few notches and the excitement on all sides was palpable.

Everyone was waiting for the next step, but the next step never came. We didn’t rush to see heaps of AEW talent in NJPW and we didn’t jump to see heaps of NJPW talent in AEW. The “forbidden door” talk has reached new heights (so much so that if I never hear the phrase “forbidden door” again in my life, it will be a day too soon), but we have never obtained immediately.

… We have drops and drops.

Minoru Suzuki showed up, but he’s since decided to take whatever reservations he can get anywhere in the country (and that’s okay, he’s allowed to pick up his flowers, the legend that he is). Satoshi Kojima has arrived. There was a sighting of Jeff Cobb at one point. But until recently – with Chaos and Best Friends becoming something of a supergroup and Jay White shaking things up from time to time – that was really all we had.

To be fair, this was all formulated during a global pandemic that has compromised travel for everyone involved. It was quite difficult to enter the United States anyway; getting into Japan at that time seemed downright impossible. There were reports of some wrestlers who were supposed to show up, but either didn’t or couldn’t, and maybe if they did, the arc of this story would be different.

Well, and then it got confused. We didn’t jump into Kazuchika Okada vs. Kenny Omega, Part Four. We didn’t get Tetsuya Naito’s third game against Chris Jericho. We didn’t even have Kota Ibushi against Sammy Guevara or Cody Rhodes or… anyone, really. Nobody knocked when the iron was hottest. It seemed like everyone was trying their best, but between travel, the pandemic, and the seemingly fragile relationship between AEW and New Japan at the time, it never seemed like dreams were coming true.

Speaking of dreams, that brings me to this little question…

Is the era of the dream match over?

One of the unintended consequences of everyone outside of WWE coming together like this is the simple fact that we can’t fantasize about what might be when it comes to dream matches. That’s because dream matches are just that – dreams. Once they become a reality, they are just another game. They could be really big games and they could become all-time classics. They could also be downright disappointing, [email protected] matches that never needed to happen. Anyway, these are no longer dreams; these are just matches.

And, in my mind, that takes the romance out of a lot of that stuff. Will Ospreay vs. Jon Moxley is a match that I’m sure at any other time would have been a dream come true, a headlining match at a big event for New Japan or AEW. Instead, because we now get these types of matches all the time, he simply appeared on an overdone episode of NJPW Strong that aired on pseudo pay-per-view.

But it’s no party if it happens every night, and I can’t help but wonder if the abundance of cross-promotional action outside of WWE is running out. Take Cody as an example. WWE crowds, weeks later, are still hot for him every time he steps into the ring, whether to speak or wrestle. Why is that? Well, in part, that’s because the idea of ​​Cody ever being in a WWE ring again seemed impossible just six months ago.

There is value in separation. It builds anticipation and forces fans to become emotionally invested in the unknown. In fact, that’s what made the New Japan/AEW relationship so intriguing when AEW first kicked off. We all wanted to see this wedding not just for the potential matchups, but also because we knew the likelihood of seeing it in the immediate future was slim. We always want what we can’t have and the more we are reminded that we can’t have it, the more we want it.

THE SHIVER IS GONE

…At this point, the shard is out of the NJPW/AEW relationship. We have seen AEW wrestlers take on NJPW wrestlers in recent memory. We’ve seen Japanese legends wrestle with regularity in the United States in recent months. So much so, in fact, that I can’t think of a match that would sell me thinking the Forbidden Door event will be a can’t miss.

Of course, I’ll probably be proven wrong, and they’ll bring up something that will make me guess that apathy. But as it stands, two months from now, it just feels like we’re going to have a bunch of multiplayer matches and then the singles matches that we get – because it’s AEW, remember – won’t have all that much building. It will be like a modern-day Survivor series, but with much better wrestling.

And I’m not intentionally trying to stack AEW or New Japan by saying anything. Those words don’t have to fall directly into the us versus them or hater-centric dialogue that wrestling fans are obsessed with these days. Instead, I’m just wondering about the value of keeping the cheat code for the non-WWE wrestling world and how or if it’s being abused. There will always be romance attached to the notion of the NWO taking on DX in some capacity. Conversely, Hulk Hogan vs. Ric Flair didn’t happen when it should have happened at WrestleMania 8 and by the time they finally got there, the thrill was at least partially gone.

That’s kind of where the NJPW/AEW stuff is now. Or, in my head, at least. It’s a novel idea, and I’m sure the show will sell out (don’t forget the success Ring Of Honor and NJPW had at Madison Square Garden with a similar show), and the way I describe this is more tough as I intended to be, but…man, sometimes it’s best to leave our imaginations to it – our imaginations. It’s like wondering what it would be like to kiss the prettiest girl in high school, do it, and shrug her shoulders because she wasn’t so good at kissing.

Or, for that matter, it’s like buying an arcade game you spent all your quarters on as a kid just to see what it would be like to get to the end…only to find that getting to the end is actually possible now, and you’re not so sure you want to get there anymore.

“The Forbidden Door” will probably be very good. But no matter how bad it ends up being, it could have been better if moderation in the talent exchange had been considered a long time ago. Because once that door becomes less forbidden, the plot surrounding walking through it takes a hit, too. And without the plot, there is only one door left.

And in this case, proceed with caution.