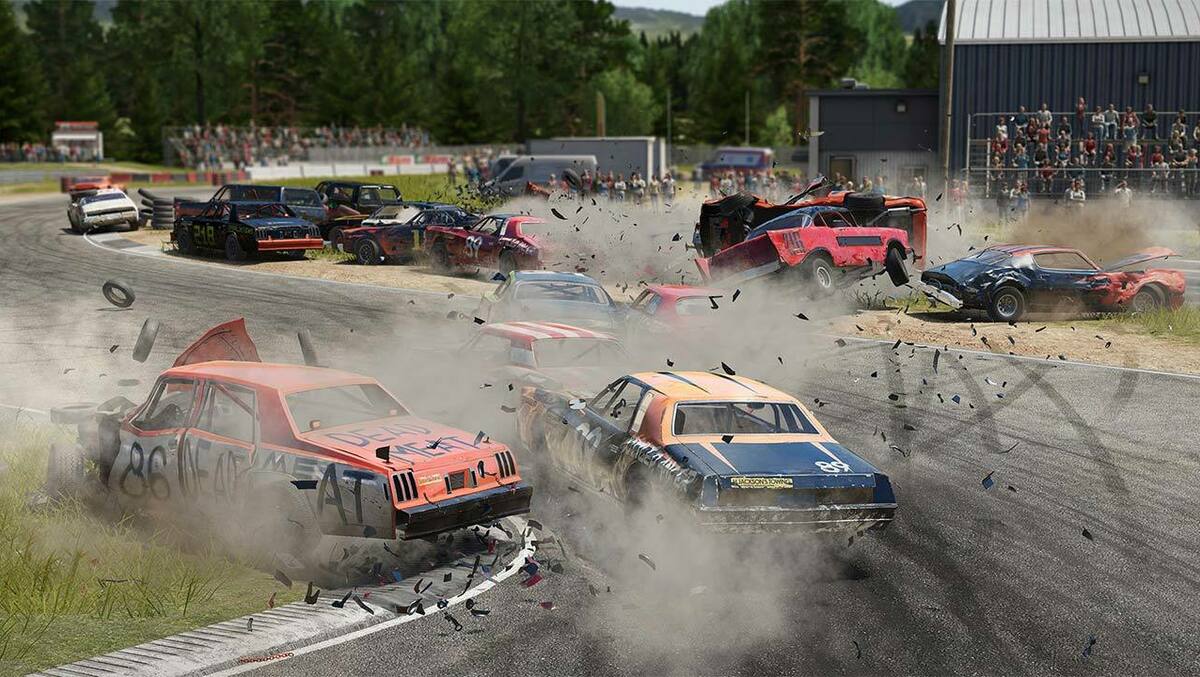 Wreckfest is a fun racing game that was released on several different gaming platforms a few years ago. One of the best things about the game is that it’s relatively cheap to buy if you own a PS4 or Xbox One console.

After many years and several ports later, publisher THQ Nordic has finally released the game for the Nintendo Switch platform. Personally, I’ve been playing the Switch version of Wreckfest for the past week now, and I’m happy to say I’m having a ton of fun playing it.

If you own a PS5 or Xbox Series X, you might already know that those versions can run the game at 60fps smoothly. While the Switch version can only run at 30fps due to hardware limitations, the biggest advantage of this version is that I can play it on the go!

Surprisingly, Wreckfest works great on the Switch as I didn’t notice any lags or slowdowns even though there were multiple vehicles on screen at the same time. Sure, some environments look a bit pixelated compared to its larger console cousins, but the graphics are still good enough for a game running on a much less powerful gaming system.

Visually, the game is still impressive as you will see a ton of debris flying through the air if you crash into vehicles. I love that this game has a strong focus on destruction and mayhem, as I missed that kind of carnage in older Burnout games.

Even a modern game like Gran Turismo 7 on PS5 doesn’t have realistic damage modeling like Wreckfest. The main reason why Wreckfest can get away with so much carnage is because there are no licensed vehicles in the game. Games like Gran Turismo 7 can’t feature too much damage because some car manufacturers don’t not allow this to happen in some video games.

Another thing I love about the game is the fact that you can drive a variety of different vehicles. Besides the usual stock cars, I got to drive buses, vans, lawn mowers, harvesters, and even a drivable couch! Sure, this game might not be realistic, but its craziness makes it a lot of fun to play.

In terms of controls, Wreckfest does pretty well on the Nintendo Switch. Each of the vehicles behaves differently from each other, although there are driving aids available for casual gamers if you’re generally useless playing driving games. If you’re good at driving games, you can always turn off the aids if you don’t need any help.

The only thing I didn’t like about the controls is that the Nintendo Switch’s triggers are too small to play in handheld mode. Holding down the trigger for several hours is a bit uncomfortable compared to Xbox and PlayStation controllers. I recommend getting a Pro Controller for Switch if you want to play this game comfortably.

However, I have to admit that Wreckfest lacks a few features that make Forza games truly accessible. Wreckfest doesn’t have a rewind feature like Forza does, so if you crash on the last lap, you might have to start the race again if you want to finish first!

Another thing Wreckfest lacks is a useful racing line overlay. Usually a racing line in Forza and Gran Turismo games allows me to see the best route to take during a race. In this game, I have to follow my instincts and find a good running line on my own, like in old school games.

There are even many standard races that have many turns and sometimes alternate paths. The only problem with some of these races is that they can get repetitive as you have to repeat many laps. You can also collide with slower cars as some tracks intersect.

The tracks are usually short, but I love that the designs are all original. You won’t be doing 10-minute tracks like the real Nurburgring in Gran Turismo 7. That being said, most of the tracks are dirt roads, so you won’t see anything too good in this game.

Overall, Wreckfest is a pretty fun arcade-style racing game that reminds me of the old Destruction Derby video games I used to play in the late 90s. Of course, PlayStation and Xbox owners might already have Played this game, but Switch players should choose it if they like fun racing games.