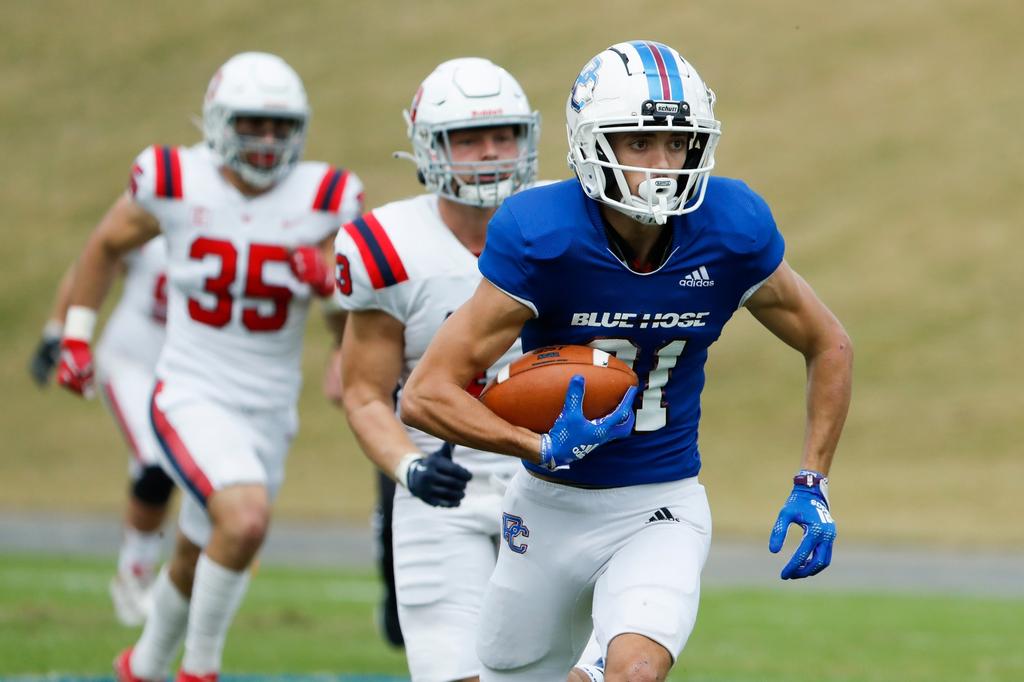 Freshman Presbyterian WR Dominic Kibby (21) had a career-high 212 receiving yards and 3 touchdowns Saturday in a home loss to Dayton.

But the ending was all too familiar for the Blue Hose who were subdued by Dayton 52-28 under cloudy skies that brought occasional rain showers in the Pioneer Football League game.

The Blue Hose responded to an 11-play, 65-yard touchdown from the Flyers with a quick hit – a 75-yard touchdown caught and executed by Nate Hayden freshman Dominic Kibby on PC’s first offensive play from the scrimmage to tie the match at 7-Sept.

Kibby, who had a career-high 212 yards and three touchdowns on 7 catches, made big plays throughout the contest, but it wasn’t enough.

“We had several plays in our first 11 games that were likely to be big plays, and we just fell behind the 8 ball,” said PC first-year head coach Steve Englehart.

Dayton made sure the Blue Hose stayed there, dominating field position by averaging over 20 yards per kickoff return and blocking a punt and returning it for a touchdown as the PC’s hopes were starting to crumble in the first quarter.

“One of the battles we talked about was position on the pitch,” Englehart said. “Our defense was at a huge disadvantage throughout the game for a variety of reasons, whether it was kickoff or punt returns, turnovers, or different things.”

Kibby, who had a career-high 7 catches for 212 yards and three touchdowns, scored his second of the day on a 63-yard strike from Tyler Wesley with 36 seconds left before halftime.

Wesley and Kibby connected again on a 31-yard touchdown pass with 13:16 left in the game, but the matter was long since settled thanks to Dayton’s dominant running game.

The Flyers have rushed for 294 yards (5.3 yards per carry), while holding the PC to minus-9 rushing yards on 19 attempts, a number that includes sack distance.
Dayton’s Jake Chisholm led the Flyers with a game-high 156 rushing yards with three touchdowns.

Wesley came on as a relief from Hayden at quarterback and completed 16 of 28 passes for 253 yards with two touchdowns to Kibby and an interception.

Notes on the blue pipe: PC recognized 11 redshirt seniors and juniors during senior day pre-game ceremonies. . . . Coach Steve Englehart said he expects to have an extended look at freshman quarterbacks Ty Englehart and Tyler Wesley at Stetson. . . PC’s 364-yard pass was a season high for the Blue Hose and came on 20 of 40 attempts. . . . At Dominic Kibby’s The 75-yard reception was the longest play from scrimmage this season for PC.