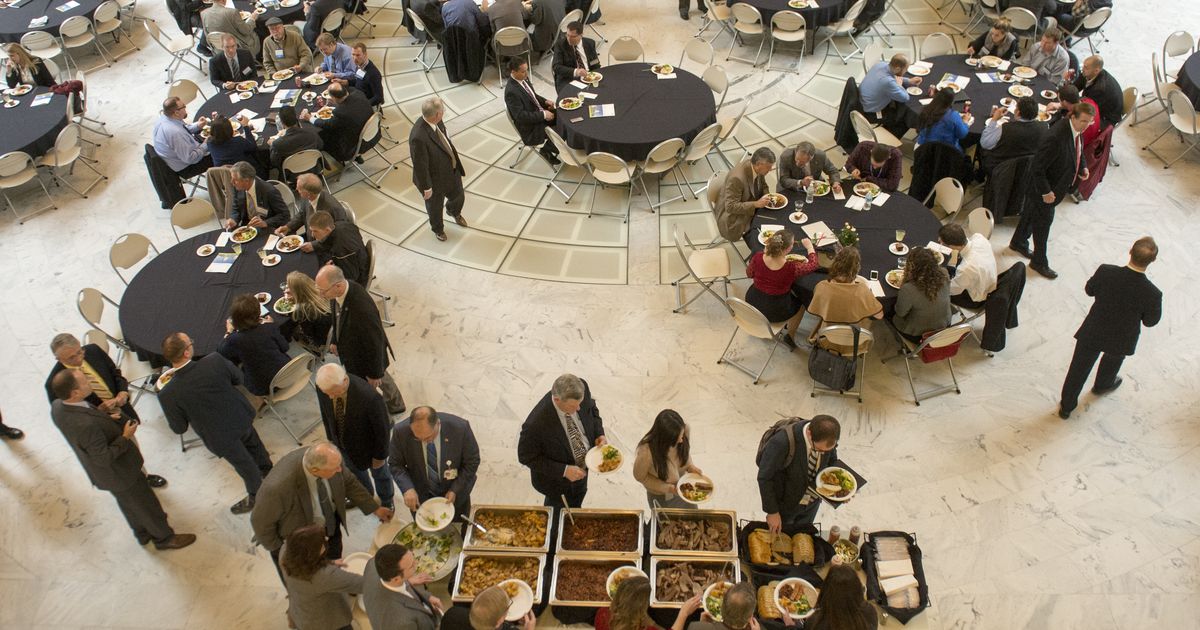 As special interest give Utah legislators 87% of their donations, questions arise about what they are buying

Meanwhile, lawmakers raked in a paltry 5 cents of every dollar from voters who live in their districts. Another 7.4 cents comes from Utah voters living outside the recipient’s district.

That’s a big difference from trends nationally, with research showing that the split in other state legislatures is about 50-50 — for contributions coming from special interests versus regular voters, says Michael Barber, a political science professor at Brigham Young University.

“One of the major contributing factors is the lack of [contribution] limits in Utah” for state offices, Barber says — so it is easy for big amounts from deep-pocket donors to overwhelm modest amounts coming from voters.

“Why is Utah so different? Is that because of our extremely lax campaign finance laws?” questions Chase Thomas, executive director of the left-leaning Alliance for a Better Utah, a nonprofit that promotes government accountability and transparency.

Utah is one of only 10 states nationally with no donation limits. Thirteen states have extra-low caps of $1,000 or less per donor per election. Montana has the lowest with a limit of just $180. Utah also allows direct donations from corporations, which is banned in 22 states.

With laws so friendly to interest groups, nearly a third of Utah legislators who raised money last year — 32 of 103 — received absolutely zero from voters in their districts, largely because they didn’t need their money.

The situation perpetually raises questions about how much access and influence special interests may be buying on Utah’s Capitol Hill, and whether legislators are beholden to them.

The Tribune every year analyzes campaign disclosure forms — including looking at addresses to determine how many donations come from voters living in a lawmaker’s district.

Some of the major findings for 2020 are:

• Special interests and out-of-state donors gave lawmakers a combined $3.22 million, 17 times more than the $189,428 coming from voters living in the recipients’ districts. Voters living outside of a lawmaker’s district provided another combined $274,716.

• Some lawmakers paid a combined $475,000 out of their own pockets to campaign. The lion’s share came from those running for the first time, in contrast to established lawmakers who attract large and numerous special-interest donations.

The outsized role of special interest money in legislative campaigns raises questions about its influence on state policy. Lawmakers and political scientists generally say it does not buy votes, but likely does improve access for donors to make their case to policymakers.

Barber, the BYU political scientist, says it especially helps interest groups to gain attention and access to lawmakers early in the process to shape legislation long before the first vote is cast.

“The real influence is happening long before the legislative session even opens … as legislators are putting bills together, as they’re figuring out what bills are going to get priority,” he says. Barber adds that asking lawmakers to vote a certain way on a bill generally is too late “because by that point the ink has dried.”

Bill Tibbitts, associate director of the Crossroads Urban Center, which often lobbies on behalf of the poor, says it couldn’t afford to make big donations even if it were legal for the nonprofit to do so — which puts it at a disadvantage to monied interests, especially during COVID-19 restrictions that make it difficult to approach lawmakers personally at the Capitol during the legislative session.

“It all depends on them returning phone calls now,” Tibbetts says. “I don’t fault them for not necessarily returning every phone call because everything is virtual — so they get so many calls now and so many emails.”

He says lawmakers know who is giving them big donations, and who could also choose to give to opponents someday. So, he says if he were a legislator, “I would return [a donor’s] call, whether I wanted to or not.”

Tibbitts adds, “If somebody has bundled campaigns from an industry, it would be unwise for your political future not to return that call. That does not mean that you’re going to give them what they want. It just means that you have to deal with them.”

For groups like his that are not big donors, he says they have to do the hard work of finding “a bunch of other people who also care” to lobby together — and use the size of their coalition to gain attention instead of big money.

He points to the big tax reform showdown that dominated legislative debate a year ago. Groups who advocated for the poor were unable to stop a proposed increase on sales tax on food. But proposals for taxes on real estate sales or legal work were dropped. Perhaps not coincidentally, real estate agents and law firms are among the state’s largest donors.

After the food tax was enacted in a special session, public opposition picked up steam with a large volunteer force and big donations and help from the Harmon’s grocery chain.

When it appeared an initiative to overturn the tax changes was headed for the ballot, the Legislature repealed the reform before it ever took effect. Several lawmakers who pushed the food tax were defeated in primaries or conventions.

It is difficult to track the correlation of campaign donations to individual votes, because legislation generally is not targeted at a single company or organization. But a bill in 2018 Legislature presented a unique opportunity to do that analysis.

The bill, HB169, granted a $1.7 million break in annual state fees to EnergySolutions, the low-level radioactive waste landfill in Tooele County that for years has been a major donor to legislative campaigns. The legislation was targeted specifically at the company and affected no other corporation nor impacted a broader industry.

A Tribune analysis found a clear correlation between campaign donations and votes.

Senators who voted for the fee break received an average of $2,541 each in EnergySolutions’ donations during the three-year period prior to the session, compared to an average $417 for those who voted no.

Then Senate President Wayne Niederhauser, who accepted $7,000 from EnergySolutions, said at the time, “There’s no question that donations probably have some influence. … That’s reality.”

Lawmakers say they listen to all sides

But legislators generally insist that special-interest donations hold no sway over their votes.

“As a lawmaker representing constituents, I listen to everyone’s input and feedback to help determine how to vote on issues,” says Senate President Stuart Adams, R-Layton.

Senate Democratic leader Karen Mayne, D-West Valley City, says that special interests get no special consideration from her, nor from most of her colleagues.

“If you want to support us, thank you very much,” she says. “But it doesn’t affect our vote. We serve our districts.”

But if constituents are so important, why did 32 of 103 lawmakers who raised money last year not bother to seek any donations at all from voters in their districts?

Wilson, who, like Adams, was among those 32, says it is a matter of enough money coming from special interests to cover the cost of campaigns in Utah, where running for office is relatively cheap compared to other states. More isn’t needed from friends and neighbors.

“I don’t think any of us enjoy asking for money from friends. And we’re public servants. We’re not professional fundraisers,” Wilson says, adding there is no need to be.

“A typical House race in Minnesota is $400,000,” Wilson notes. “We just spend a lot less here on elections where it is more grassroots.” Tribune analysis shows that Utah legislators spent an average of $51,000 on campaigns last year.

Still, Thomas with the Alliance for a Better Utah says that it is worrisome that so many legislators raise no money at all from constituents.

“It’s definitely a concern if someone’s receiving all of their contributions from special interests,” he says. “Basically, the entire financing of their campaign is by special interests and none by the people who are actually voting for them.”

One top donor in Utah acknowledges that his company gives to increase access to politicians to discuss concerns, while another says it gives to help lawmakers who support its goals.

Dewey Reagan, president of Reagan Outdoor Advertising, said in an email, “Reagan supports the political process in hope of working with the individuals that establish regulations” about its industry, and to gain access to policymakers to discuss concerns.

“Supporting the political process enables Reagan to participate in how these problems are solved,” he said. “Candidates who are willing to serve in these complicated times, in an effort to confront the complex problems facing society currently, need both public and private support in order to do so.”

Critics see Reagan’s donations as having a big impact on state law, which in several areas has trumped the power of local governments to regulate billboards.

Caro Norton, president of the Utah Association of Realtors, which is almost always the largest donor in the state, said in an email, “We get involved in the political process because we want all Utahns who desire to become homeowners to have the opportunity to achieve that dream. We support candidates who will consider how their policy decisions will impact homeownership, housing affordability, private property rights and the economy.”

The association chooses who will receive donations based on the politician’s need and stands on home ownership issues.

Norton sidestepped a question in an email about whether she believes donations increase her group’s access to lawmakers, responding, “Our focus is to support candidates who value homeownership, who will ethically and independently analyze how their policy decisions will affect someone’s ability to buy a home.”

While questions about what special interest donations buy arise constantly, most see no change soon in the system.

Thomas, with the Alliance for a Better Utah, calls the issue “a huge concern.”

He suggests one way to limit the influence of special interests is to limit contributions from corporations, political action committees and individual donors.

But Adams, the Senate president, says he and most of his colleagues see no need for such a change

“Utah has struck the right balance to require conflict of interest and all donations be disclosed,” he says. That way, he adds, voters may judge for themselves if a lawmaker is too beholden to special interests.

Lending on Character, Not Credit Scores

Are you looking for payday loans in Utah?