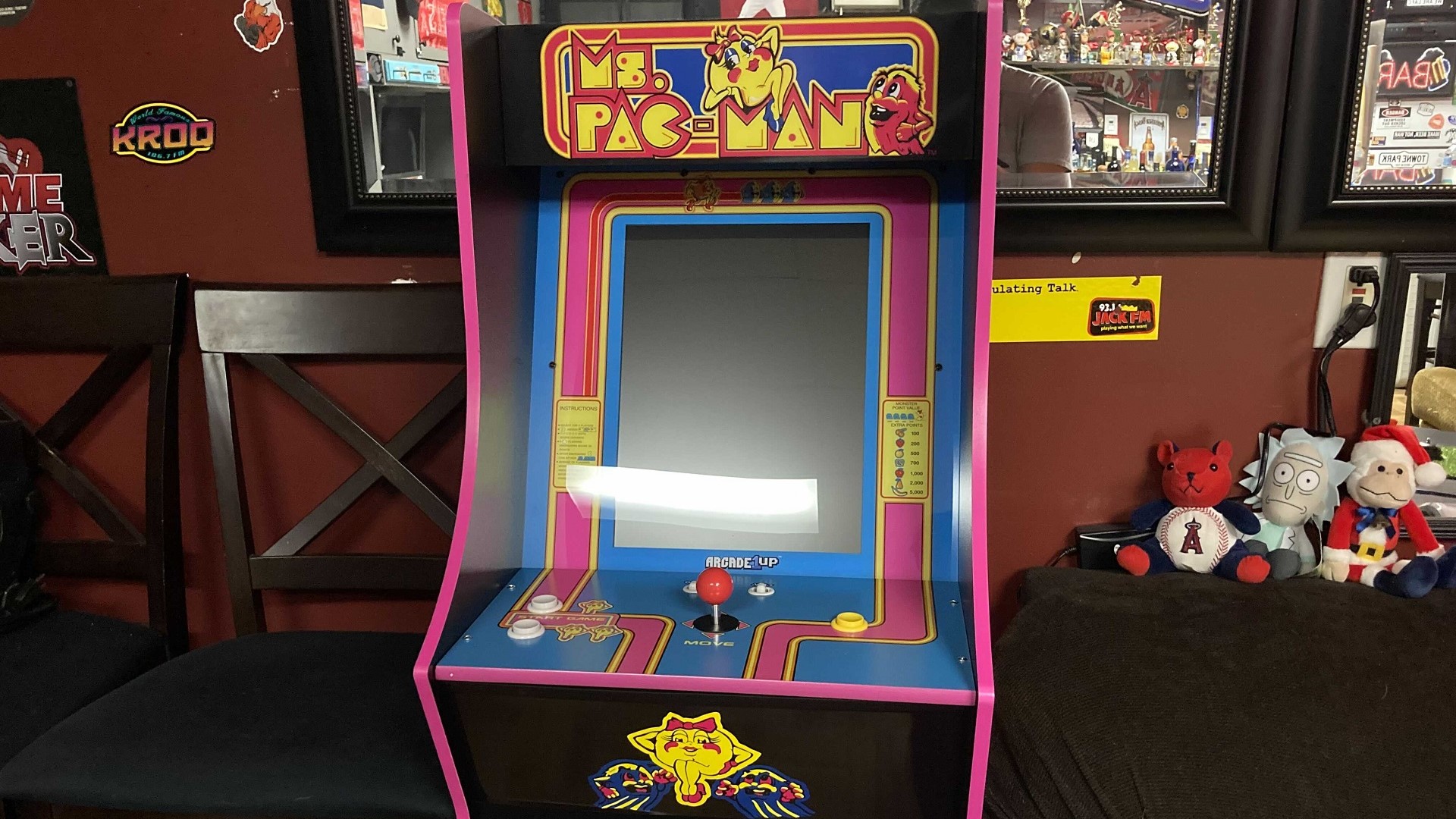 No one reading this needs me to tell them that Mrs. PAC-MAN is an all-time video game. He was one of the pioneers of this medium. Young readers might not realize it, but there was a time in the ’80s and’ 90s when you could barely walk a block without hitting a Ms. PAC arcade machine. -MAN. With that in mind, I was delighted to try out this arcade machine, provided by the folks at Arcade1Up. After taking turns with members of my family, I can say that this machine is a success.

When the Arcade1Up box first arrived, I couldn’t help but be a little intimidated. It’s a massive box, at just over 80 pounds. It has been said in previous reviews before, but if you are making this type of investment, it is not a business you should be doing on your own. You will need some help putting this thing together, as well as plenty of room to work.

The good thing, however, is that for an arcade machine that’s almost as big as the original, this thing is pretty straightforward to put together. As long as you have a pair of screwdrivers handy, you should be more than good to go. The instructions are clear and illustrated for hobby builders with the only real issue being that one person has to support some boards, while a second person places all screws and components. Don’t worry if you drop a screw or component, as there are plenty of extras on hand.

The best part is that the monitor and the joystick fit together perfectly. There is no complicated wiring at work here. It’s a simple matter of plugging some cords together and making sure they come out on the correct side of the cabinet, so they plug into the wall. Overall, the assembly process takes longer than anything else, taking a little over an hour to put together.

Here is where I would review the full package, but one thing to note about the Ms. PAC-MAN machine is that whatever version you get from different retailers may contain a different set of games. To clarify, depending on where you choose this arcade machine, you might end up with Galaxian, PAC-PAL, PAC-MANIA, Super PAC-MAN, Dig Dug, or any other seemingly random combination of titles. Wal-Mart, for example, presents Galaxian, while Sam’s club includes PAC-PAL. My machine contained Mrs. PAC-MAN, Dig Dug, Super PAC-MAN and PAC-MANIA and it all played out like a dream.

The 17 “LCD monitor brings those arcade titles to life and makes them appear crystal clear. The joystick has a bit of a clicking sound that takes a while to get used to, but the input is responsive, there is no of noticeable lag, and there’s a firmness in the joystick that feels like you won’t break the thing in a matter of weeks.

On the presentation side, it fits perfectly into a standard apartment or a garage / mancave. Taking it to my brother’s cave, I was concerned that there would not be enough space to store it around the sofas, bar, pool table, washer and dryer. Finding a place for it was not only easy, but once the cabinet is assembled it is much easier to move around. Two people can easily carry it around, much easier than the original box. Wherever it arrives, it will bring personality to its space, thanks to the illuminated marquee.

It should be quite easy to find an Arcade1Up Mrs PAC-MAN cabinet, as they have been in the wild for a few years. However, those looking for something a little different (and a little more) might want to look for Wi-Fi. Class of ’81 cabinet, which comes with 12 titles. This should be shipped within the next few weeks.

This opinion is based on a firm provided by the company. Arcade1up cabinets are available to purchase online and at retailers now at a starting price of $ 399.99.

Ozzie has been playing video games since he bought his first NES controller at the age of 5. But he was pulled after spending years in QA circles for THQ and Activision, mostly spending time helping push the Guitar Hero series to its peak. Ozzie has become a huge fan of platformers, puzzle games, shooters, and RPGs to name a few genres, but he’s also a huge fan of anything that has a good, compelling story behind it. Because what are video games if you can’t enjoy a good story with a fresh Cherry Coke?